This year’s last post is all about time. In fact, it’s about how to get NTP working within an isolated network. The Network Time Protocol is a network protocol used to synchronise computer clocks across networks. It is necessary as computers measure time using oscillating crystals. However each computer has a slightly different oscillating interval that causes the local clocks of different systems to drift apart. This can cause problems in distributed systems.

One such problem occurs within redundant playout systems with multiple servers. All systems need to have exactly the same time reference (and to do so they often use the local system time) to play the same video frame all the time. Otherwise there is a visible service disruption during fallback. 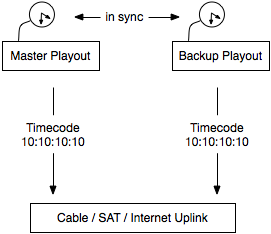 As this example shows it’s more about a coherent time source / reference than it is about a correct one. What that means is that it is more important that all systems have exactly the same time, however it does not really matter if it’s 0,5 seconds ahead the correct one.

To do so I always use one Linux system within the isolated broadcast network as NTP server using ntp. This server gets queried by all other systems and shares his local time. 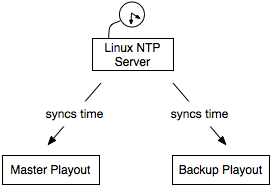 There is only a small problem with this setup. As the time source for the Linux NTP Server is only his oscillating crystal and not a precise system like an atomic clock the other systems don’t trust his information. His strata is simply too high. There are two solutions to solve this issue:

Whichever you use, you will get a coherent time reference on all nodes within the network. However be aware that it’s just a relative time.