The first and most important thing you need to know about the Pass the Hash (PtH) attack is, that it is not a single attack but actually a whole group of attacks that should correctly be called Pass the X. In any of these, the attacker obtained some kind of user identifying information (like the plaintext user password, a password hash or a Kerberos ticket) and uses them to impersonate as that user. This post focuses on the NTLM hash and the Kerberos tickets as they are the most interesting one’s from the Pass the X’s point of view. This attack is possible not because of a security vulnerability or design issue but because of the infrastructure necessary to enable single sign on (SSO). Although it can be used on any operating system and any version, Windows networks are the primary target.

At TechEd North America 2014 Mark Russinovich and Nathal Ide gave a great talk on the technical background of Pass the Hash styled attacks. It’s available on Youtube and I really encourage you to watch it.

In the following paragraphs I will try to give an overview about the different Pass the Hash attacks and scenarios. However this is not a tutorial and so I will not document the specific commands. Please see the section “Your Toolbox” for further details, tutorials and the necessary tools.

Where To Obtaining User Identifying Information From?

Before an attacker can start a Pass the X attack he has to obtain something to pass along. There are two ways to do so. Either he gains local administrator rights on a client and dumps the hashes of all currently logged in users from the so called Local Security Authority or he gains access to a Domain Controller and dumps possibly all user hashes from the AD.

Dumping from a Client

Let’s start with the somewhat less severe scenario of a client overtaken by an attacker with access to a local administrator. In Windows the Local Security Authority or lsass.exe is the process responsible for enforcing the security policy on the system. Furthermore it is also responsible for transparently authorizing the users to the services they want to use. For example if a user connects to a file server the system negotiates the protocol to use and the Local Security Authority transparently tries to sign the user in. It supports many different protocols like NTLM, Digest and Kerberos and it can also be extended by plugins.

The important thing is that depending on the protocol, the system has to cache a varied of user identifying data in order to successfully reauthorize the user. For example the Digest module needs to cache the user password in reversible encrypted form. An attacker can use any of this user idenfitiying information for this Pass the X attack. 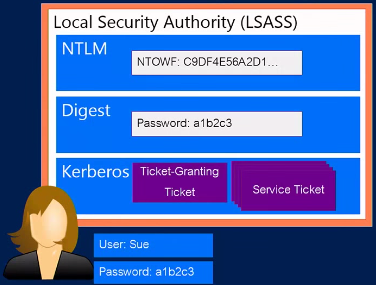 With that knowledge any local administrator can dump the memory of the lsass process (with for example mimikatz, WCE or Task Manager’s Create Dump File) and thereby obtains the cached user identifying information of all currently signed in users. Depending on the enabled modules this at least reveals some password hashes but it might also already dump their plaintext password.

The second way of dumping user identifing information can only be used by an attacker that already gained access to a Domain Controller. There he can dump the LM and/or the NTLM hashes of all users as they are stored in the Active Directory. Again it does not really matter which one he captures as both can be misused.

You may ask why an attacker with Domain Admin access still leverages Pass the Hash styled attacks? Well, it allows him to impersonate as any user on the domain without knowing or resetting the user password. Thereby he can easily access the user’s Exchange and Sharepoint account as well as connect to any file share the user has access to. This approach is especially great when giving presentations to C level executives. They may not care about an attacker being Domain Admin but they will care for sure if it allows them to access their mailbox or calendar.

As it is a little more complex to dump the hashes out of the Active Directory I will cover this process briefly. Generally there are two steps: At first an attacker creates an offline copy of the registry and the AD. This can be done with the help of ntdsutil and VSS. Then he moves the files off the Domain Controller to his local machine. There he uses a tool like secretsdump to extract the hashes as shown in the picture above.

Although you already know that the hashes allow an attacker to impersonate as that owner of the hash, we will now cover this is more detail. If you are interested in a live demonstration I recommend you to watch the first 26 minutes of the talk “Still Passing the Hash 15 Years Later” from Black Hat USA 2012.

As discussed in the beginning the Local Security Authority is responsible for caching the user identifying information. To use the stolen hashes an attacker now simply replaces the user identifying information within the lsass.exe process on his own computer (again with for example mimikatz or WCE) with a stolen one. From the network’s point of view he thereby basically transformed his account to someone else’s. Mark Russinovich and Nathal Ide also talk about this process in their presentation “Pass-the-Hash: How Attackers Spread and How to Stop Them” starting at minute 7:10.

By doing so he also gains the single sign on (SSO) capabilities of the original account because the is what the hashes are intended for. That in turn allows him to use any service and application that builds upon the Windows Integrated Authentication including but not limited to:

Again: By replacing the information within the Local Security Authority the attacker changed his identity to someone else’s without knowing the corresponding password. He can use any service the rightful account holder could use as long as it supports single sign on. This also works for accounts that use a two factor authentication like a smartcard as they still rely on the same single sign on infrastructur.

A special case I want to highlight is the Golden Ticket attack. If an attacker obtained the NTLM hash of the KRBTGT domain account he can create a so called Golden Ticket. This is nothing else than a valid self created Kerberos Ticket Granting Ticket (TGT). With that ticket it is not only possible to impersonate as some else but it is also possible to authorise yourself. It is basically an attackers dream. The video below shows that attack in action.

For an attacker or pentester Pash the Hash styled attacks are a very valueable attack vector. Virtually all companies are prone to it as single sign on is used by many of the most business critical applications. Furthermore it often allows an attacker to rapidly elevate his priviledges after obtaining initial access to a low profile client.

Although Microsoft already actively participates in the ongoing debate about Pass the Hash it is still a long road before all organisations understand the associated risks. I have commited myself to actively point people to Microsoft’s Pass-the-Hash portal so that the words spreads a little faster.

If you have any questions or additional input please leave a comment below.

Finally here is a list of applications and the corresponding documentation for your further reading. All this links really helped me to deeply understand Pass the Hash styled attacks and to write this summary. Hereby I want to thank all the authors for their great job!