This post is about a Man in the Middle (MitM) vulnerability in KeePass 2’s automatic update check. KeePass – the free and open source password manager – uses, in all versions up to the current 2.33, unencrypted HTTP requests to check for new software versions. An attacker can abuse this automatic update check – if enabled – to “release” a new version and redirect the user to a malicious download page. Update: At the first start the users is asked if he wishes to enable the recommended update checks.

During a recent traffic analysis I stumbled upon an interesting request to http://keepass.info/update/version2x.txt.gz. As I had a few hours spare over the last weekend I took a closer look. 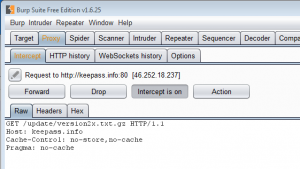 It turned out that KeePass 2’s automatic update check uses HTTP to request the current version information. For that purpose it downloads the following text file from http://keepass.info/update/version2x.txt.gz

If the user now clicks within the update dialog to download the new version, the URL http://keepass.info/ is opened to manually download the new release. Guess what, we can also intercept that traffic as it again uses HTTP. Thereby an attacker can even indirectly control the downloaded “update”.

The following video shows the attack in all it’s glory:

For any security centric tool – like a password manager – it is essential to not expose its users to any additional risks.

Hence, I strongly recommend that all requests should be switch to encrypted HTTPS communication – especially version checks and updates! This should be fairly easy to implement and should not introduce any compatibility issues. Furthermore a valid certificate should be used for https://keepass.info and all unencrypted HTTP requests should be redirected to the encrypted version of the site. To provide even more security it is recommended to add the HTTP Strict Transport Security (HSTS) headers. As an alternative the update check feature could be removed.

Until the version check has been switched to HTTPS update notifications should be taken with a grain of salt. To be on the safe side, new releases should be downloaded only directly from Keepass’s secured Sourceforge page: https://sourceforge.net/projects/keepass/