Welcome back at part three of my blog post series about IPv6 for pen testers. In part 1 we already covered the advantages of IPv6 and how IPv6 addresses look like and in part 2 we discussed the three different IPv6 address types and how Link Local adresses are generated. I encourage you to read both posts before continuing as they cover the basics for this entry. We will now take a closer look at IPv6 multicast and how Layer 2 address discovery is implemented.

Although already available in IPv4 almost nobody ever heard of multicast before. What it does is, it enables a one-to-many communication pattern on a network level. To do so, so called multicast groups are formed. These groups are basically special IP adresses within the so called IP multicast range (224.0.0.0/4 in IPv4 and ff00::/8 in IPv6). A client that is interested in joining the communication in such a group instructs the network to send this group specific communication to its network port. All clients that are not interested do not even receive the traffic as they did not join the group. If you are interested in what multicast groups a system is joined you can use the following commands:

With IPv6, multicast will be a fundamental part of every network  and will even replaced all broadcasts.  This is especially important as broadcasts have been a problem for years in large networks as they are sent so all systems in the whole network and thereby cause a lot of unnecessary network traffic. Furthermore every broadcast has to be processed by the end device and thereby wastes processing power.

However without broadcasts a problem arises: ARP the Address Resolution Protcol used for resolving IPv4 to MAC addresses and thereby enabling the necessary OSI Layer 2 communication can not be used anymore and a replacement has to be defined.

This replacement is called Neighbour Discovery (ND) and is built on ICMPv6 and IPv6 multicast. It works by sending a Neighbour Solicitation (NS) request to the address dependent Solicited-Node multicast address while listening for the correspoding Neighbour Advertisement (NA) answer. Before covering this process in detail here are the commands used for showing all known neighbours similar to the ARP table:

If in turn System B wants to send data to System A (2000::9999:1111) it needs both the IPv6 address and the corresponding MAC address. To get the MAC address, it sends a Neighbour Solicitation (NS) message to the Solicited-Node multicast address ff02::1:ff99:1111. System A will reply with a Neighbour Advertisement (NA) containing its MAC directly to System B. After that System B has all the necessary information and can send data to System A. The image below illustrates the process. 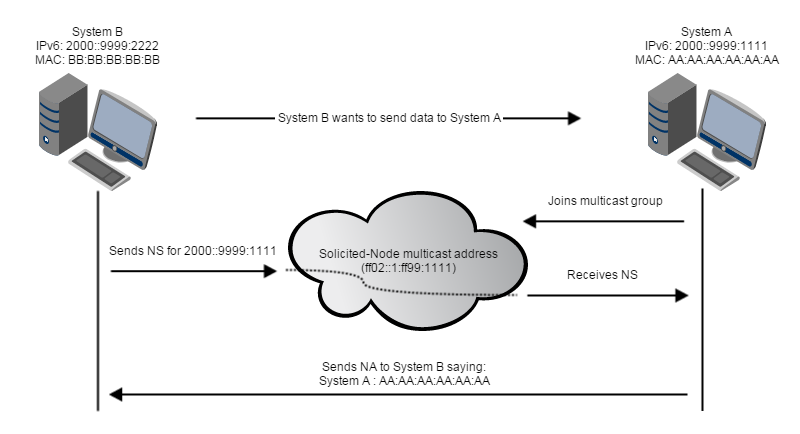 Beside the discovery of Layer 2 addresses this process is is also used to avoid address collisions. Before a new IPv6 address is assigned to an interface the systems sends a Neighbour Solicitation message to the corresponding Solicited-Node multicast address. However instead of using the interface’s IPv6 address – which has not been set up yet – the unspecified address :: is used instead. If the address is already in use the owner replies with a Neighbour Advertisement to the IPv6 All-Nodes multicast address and the setup process is aborted. If no answer is received within a given time frame it is assumes that no-one else is using it and the setup continues. This process is called Duplicate Address Detection (DAD).

Before summing up let us briefly cover a good trick that can be used by pen testers to detect all IPv6 capable devices. As we already discussed there is the All-Nodes IPv6 multicast group. In contrast to IPv4’s broadcast you can ping this group while getting a reply from all IPv6 devices on the network. This is a great way to find your targets! The following commands show how to ping the All-Nodes IPv6 group:

To summarize, we covered what IP multicast is and what it is used for. Furthermore we talked about IPv6’s ARP replacement namely Neighbour Discovery and how it works in detail. In the next and final part we will then cover how IPv6 Addresses are managed without the need for a DHCP service and why you still need one.