RAM disks are available since 1979. They offer a filesystem in RAM and therefore outperform most of all other storage systems. This can be used to do disk intensive operations in a fraction of the normally required time. This article covers Mac OS X 10.5 and later. If you STILL use earlier versions take a look at the article posted by OSXDaily.

The size of the disk is based on the number of 512 bytes sectors. That means the size in bytes has to be divided by 512. For example to calculate the size parameter for a volume with 4GiB the following formular is used:

Be aware that the content of a RAM disk is permanently deleted as soon as it is ejected! Only use it as temporary storage!

To simplify the process I created RAMDiskCreator. It’s a freely available tool and offers a graphical user interface for the RAM disk creation. Only the size and the volume name have to be provided. In the background the same command is used as described above. 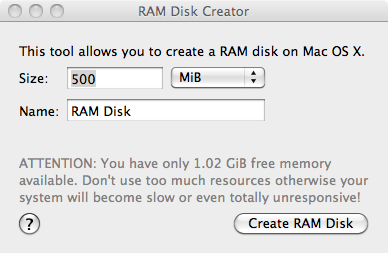